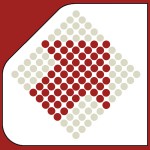 Direction 2030: Your Voice. Your Choice—was the 2016 recipient of a national Award of Excellence in the Comprehensive Plan – Large Jurisdiction category. The award was one of several accolades granted to planning projects from across the nation by the American Planning Association (APA), County Planning Division, and its sister organization the National Association of County Planners.

The award was presented April 4 during the APA National Conference in Phoenix, Arizona. 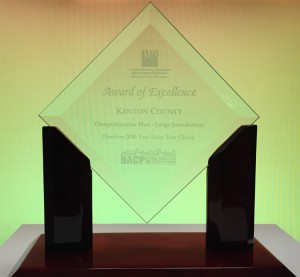 “The award recognizes the hard work by members of the planning commission, citizens and interest groups from across Kenton County, and of course staff who put in countless months on the project. This plan was truly a collaborative effort,” said Gordon.

The Kenton County Planning Commission adopted the community’s first comprehensive plan in 1972 and incorporated updates every five years thereafter according to Kentucky law. The combined 26.2-pound, 12.5-inch-thick behemoth influenced land use decisions until the Great Recession established a ‘New Normal.’

The diverse group of participants developed its replacement—Direction 2030: Your Voice. Your Choice.—through an aggressive three-year public engagement process. That process accomplished what many thought previously would be impossible: to build consensus among all 20 of the county’s local governments, their 126 elected officials, and their 20 planning commission members.

They grounded the plan in research provided by a national market analyst, most of it from sources bankers use for reviewing development-financing strategies. This established the plan as a unique resource for near-term development proposals and a baseline for state-mandated five-year updates.

Stakeholders played a critical role in crafting a number of its innovative policies. Their opposition to broad recommendations prompted planners to divide the county into four subareas—urban, first‐ring suburb, suburban, and rural—to reflect the community’s diversity. Policies are based now on the differing lifestyles found across these subareas.

The participants advocated for an easy-to-use final product. Planners responded with an online comprehensive plan (direction2030.org) that documents the plan’s creation, delivers guidance to anyone anywhere 24/7/365, and incorporates GIS technologies to entice users to interact with its contents.

The groups also called for accountability to assure that the plan’s objectives would be implemented. The PDS staff created a second website (action.direction2030.org) to keep participants and stakeholders up to date with information from the various implementation efforts being undertaken by the planning commission 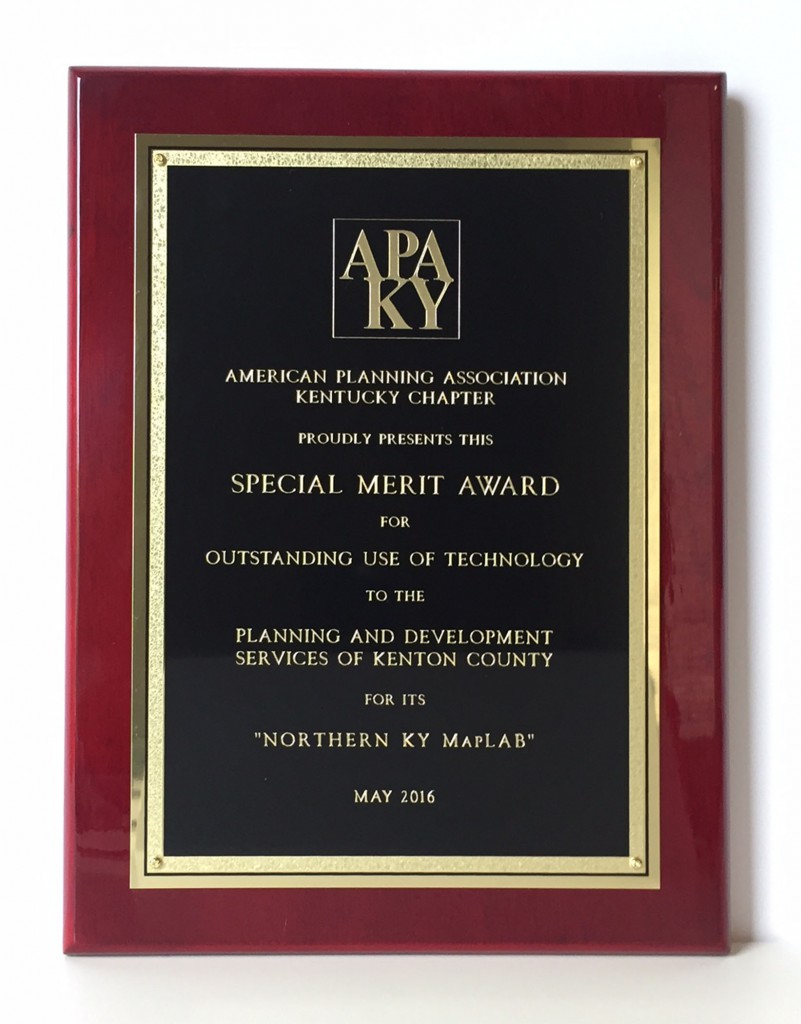 and others across the community.

This national award follows an Award of Merit for an Outstanding Comprehensive Plan given last year by the Kentucky Chapter of the American Planning Association.

Only one Award of Excellence and one Award of Merit may be granted per category each year. If the awards jury finds that none of the nominations in a particular category meets the desirable standards, they may withhold the award in that category for that year.

“This recognition, without question, goes ultimately to the countless residents who came out to express their hopes and dreams for Kenton County’s future. Much more than merely a title, Direction 2030: Your Voice. Your Choice. really did represent the ultimate goal for our process and our final product,” concluded Gordon. “We couldn’t be prouder that our collaborative efforts are being held up as a model.”